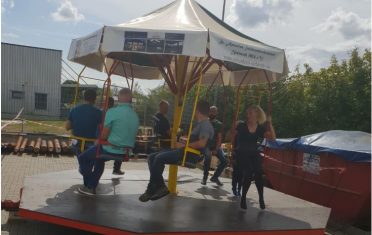 This year’s Summer Festival took place on August 31. On the occasion of the 20th anniversary of AS Tech and the 10th anniversary of GWS Tech this year, the families of the employees were invited in addition to all colleagues.
After a lunch together, the bouncy castle and the chain carousel could be inspected and, of course, tested extensively. Not only with the children present, these attractions were very well received. Many colleagues also took the opportunity to introduce their families to their jobs and projects. After a rich buffet of suckling pig and many other treats, the evening was brought to a close in a cosy round and took the opportunity to talk to colleagues outside of daily work.