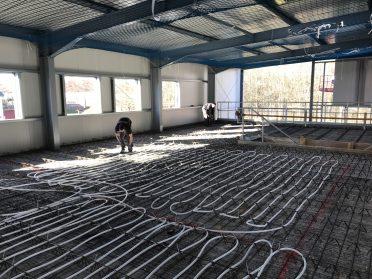 Even though the temperatures were almost springlike at the end of February, arrangements for the cold days were already being made at the GWS construction site. Shortly before Carnival, the so-called “concrete activation” was completed there. This is a kind of underfloor heating system in which the loops are placed directly into the concrete and which is soon to bring pleasant temperatures to the staff in the hall. Since the whole complex is heated with the help of a heat pump, which can reach a maximum pre-temperature of 35 degrees, a large area is needed for heating to reach the desired temperature. The advantage of the system is not only the low energy consumption, because the concrete is heated through and through and stores the heat, but also the pleasant, even heat release.

In addition to the heating, further work has also been completed in the meantime. The first floor as well as the roof of the office complex are completed and all windows are installed. So the shell construction is finished. In addition, except for a small area on the back, which receives a different material, the cladding of the hall is also ready. So the work is progressing in great strides and so the hall is expected to be able to be used for storage as early as March.